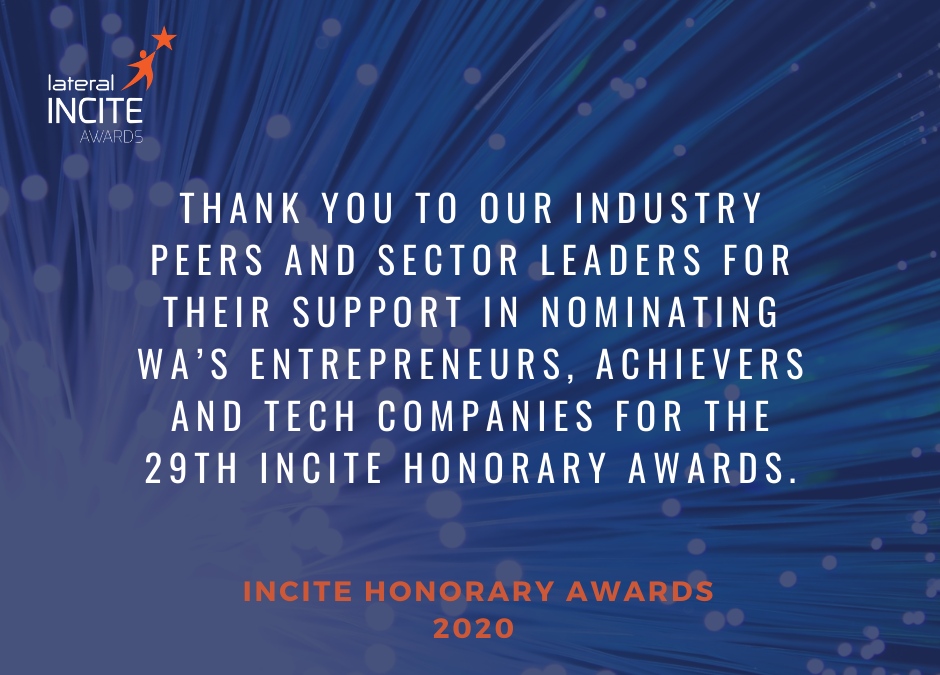 Every year, the INCITE Awards pay respect and acknowledge the outstanding contribution that local industry entrepreneurs, leaders and tech-based companies make to advance innovation and opportunities for the Western Australian ICT and tech sector.

INCITE does this through its three peak Honorary Awards of:

In a normal year, the INCITE Committee would present these awards together with all the other product categories. However, in the unprecedented time that is 2020, the Committee decided on postponing the process and announcement of these Honorary Awards until the last quarter of the year.

As the Committee is close to completing the judging for the Honorary Awards, we are pleased to provide an update on the selection process and share the nominations for each Awards category.

After a close to a twelve week period of open nominations from colleagues, industry peers and leaders in WA’s ICT and Technology sector, we have received a number of entries for the above mentioned awards categories.

A careful review of each nomination was then conducted by our Chief Judge before the nominations were then provided to a Judging Panel – one was set up for each Awards category – to go through a rigorous judging process.

Our Judging Panel involved a number of industry and technology leaders carefully viewing all applications against best practice selection criteria over a 2-week period from the beginning of November.

Once the Judging Panel has agreed and submitted their recommendations, the Chief Judge works with the Chair of each panel to check through any potential conflicts of interest or irregularities in the selection process that might affect the recommendations.

Judging for each of the Honorary Awards category has now been completed and the INCITE Committee is excited to announce the winners soon.

Winners of the 29th INCITE Honorary Awards in the categories of Pearcey WA Entrepreneur of the Year, Achiever of the Year and Dr Mal Bryce Tech Company of the Year will be announced via our social channels on Wednesday 25 November 2020.

Make sure you follow one of our channels to get the winners’ announcement news on:

Thank you to our industry peers and sector leaders for their support in nominating WA’s entrepreneurs, achievers and tech companies for the 29th INCITE Honorary Awards.

There are many dedicated and hardworking contributors within our local ICT and Technology sector who make it possible for our industry to grow and provide social, economic and community benefits.

We say thank you to them and are proud to announce and showcase this year’s Honorary Awards nominees.

Achiever of the Year nominees