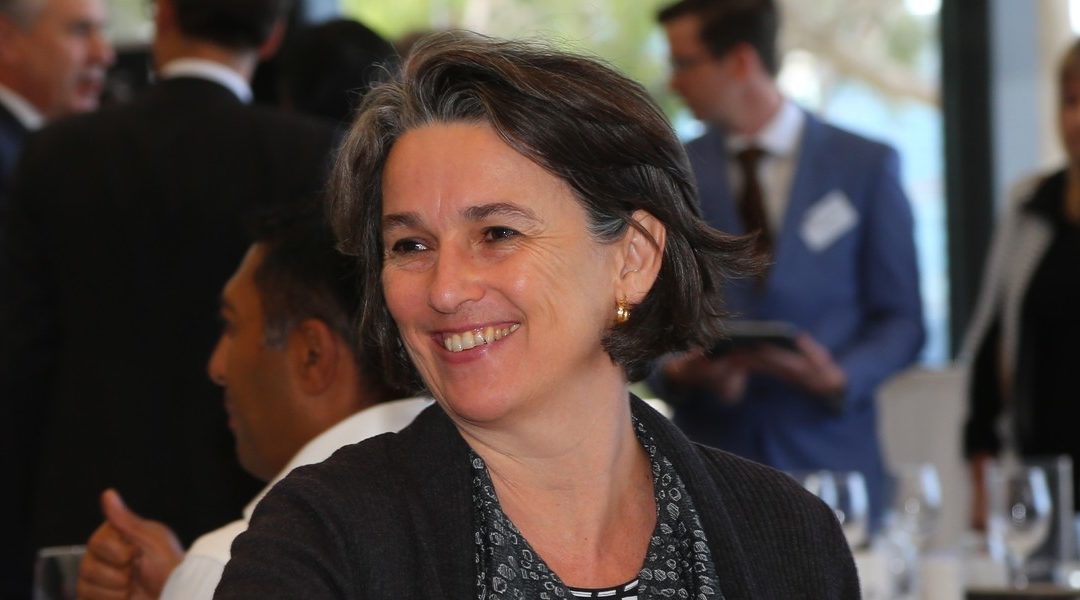 Sue Findlay had been a dedicated WAITTA Committee member for 10 years by now, and it was good to see her take the reins, as she also had a vision for the road ahead

I asked her how the Awards had changed since it first began, apart from an extra “T” for “Telecommunications” being added to WAITA, in 1991

“In 1991, around the time the internet became available by dial-up, we had just 4 categories: Achiever, Exporter, Installation and Product, there were 4 judges. 110 people came,” said Sue, “And I think it’s fair to say that most of these people came for the ACS Conference, as the Awards were merely an item at the Conference. But by 2014, we had 19 categories and 63 judges, and there are around 435 people attended – 4 times the 1991 figure – and all of them are here, solely for the WAITTA Award”

Running the Awards is certainly a big “ask” in anyone’s life. As my good friend and Social Strategist, Ming Johanson, so aptly put it recently, “Managing social media events are not all sparkles, glamour and glorious food. It’s hard work to make sure things are as planned as possible for engagement on the night”.

So, I asked Sue why she does it.

“I do it, because it inspires me. Every year I’m absolutely blown away by the quality of the entries, the innovation of the products and services, and the sheer brilliance of the ideas presented. As judges we see the best of the best this State has to offer.”

The WAITTA Awards was now, and had been for some time, the major ICT Awards event in WA. Winning it was a high-point in the lives of individuals, companies and organisations involved in ICT.

There have been many success stories by this time of course.

Transmin, for example, who won the Innovation award two years previously, was later featured in the National media, and cited winning the WAITTA Awards as being a considerable factor in winning other awards and grants and increasing their market dominance.

Around this time the WAITTA Awards aligned with iAwards, the National ICT awards program. Now for the first time, WAITTA winners and finalists, were automatically entered into the iAwards in Melbourne; providing them with a pathway for National market exposure and recognition.

And if that wasn’t enough; winners of the iAwards would be entered into the APICTA Awards (Australia in the Asia-Pacific awards) in Lahore, Pakistan. WAITTA provided financial assistance to the iAwards.

“Of the two Australian winners and two Australian merits at APICTA last year, the two winners and one merit were from Western Australia.” Said sue. And she also pointed out that despite the Government’s general lack of interest in the ICT industry and WA scoring just 1 point out of a possible 12 in IT News “IT maturity index”; “12 entries this year were from Government Departments in the Government category, and all were extremely high quality”.

Continuous improvement – but at a cost.

During this time WAITTA was going through a period of soul-searching. It was already a great platform, but the committee were keen to achieve greater relevance, that could at least keep pace with and increasingly sophisticated industry. This resulted in a greater demand for sponsorship to back the changes required to the new ‘look and feel’

And the changing economy impacts our State

“We had barely completed last year’s dinner when the oil and iron ore prices dropped and the whole State economy came to a screeching halt. You could see skid marks in the economic tarmac. It was a marvellous example of how vulnerable we are to the resources sector,” said Sue.

And such an economy puts more reliance on the ICT sector to put food on the table.