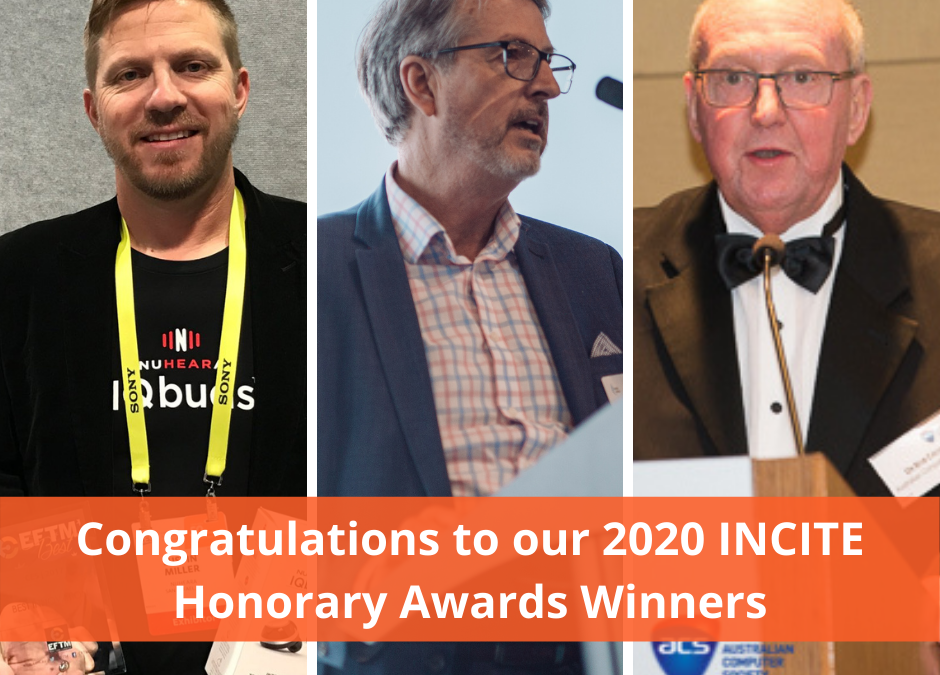 The INCITE Awards – WA’s longest running ICT and Technology program – has concluded its 29th Awards program for 2020 by acknowledging the contributions that local tech leaders, entrepreneurs and companies have made to the sector.

Three Honorary Awards – the Pearcey WA Entrepreneur of the Year, Achiever of the Year and the Dr Mal Bryce Tech Company of the Year – were awarded virtually on Wednesday 25 November 2020 via the program’s social channels.

Named after the late Dr Mal Bryce – former WA Deputy Premier and a champion of innovation and technology – the Tech Company of the Year acknowledges an organisation that contributes to the diverse economy of Western Australia, standing in its own right while changing and transforming industry.

“Nuheara is a leading hearables company that has pioneered a new “smart hearing” product category that sits between high-end headsets and sophisticated hearing aids which delivers affordable and accessible hearing devices to the masses.”

The Pearcey Awards acknowledges an outstanding entrepreneur who has “taken a risk”, “made a difference” and “is an inspiration.

“The INCITE Awards Committee are pleased to award the Pearcey WA Entrepreneur of the Year to Greg Riebe, for his over 20 years of work mentoring, inspiring and supporting emerging technology-based businesses with services including investment readiness, capitalisation, breakthrough growth readiness and execution,” said Sue and Niamh jointly.

“Greg is a committed and actively engaged member of the ICT community and entrepreneurship space in Perth. He is also a mentor, speaker, adviser and the recent recipient of the 2020 Angel Investor of the Year Award, at a national level.”

The INCITE Achiever of the Year Award is the program’s peak award and recognises an individual’s outstanding contribution to the ICT industry in WA, and also in the national and international sectors.

“Dr Bob Cross is the worthy recipient of this year’s Achiever of the Year Award,” commented Sue and Niamh jointly.

“Bob has been in the ICT sector for nearly 40 years, leading software development teams for the implementation of some of WA’s largest ICT projects with Datec, IBM and Computer Sciences Corporation.”

“Bob then moved on into the academic world where as the International Director, he established key partnerships for ECU with India, China and SouthEast Asia. Congratulations Bob and thank you for your continued contribution to our local and wider ICT industry.”

Celia Jordaan, Chief Judge for the INCITE Awards, commented that year on year, the INCITE Awards receive a number of exceptional nominations for the Honorary categories, recognising the work often done behind the scenes to support innovation and the ICT community in Western Australia.

“Every year, we – the INCITE Committee – and Judging Panel are impressed with the exceptional achievements, contributions and dedication that our local entrepreneurs have provided to the WA ICT, Technology and Innovation sector,” commented Celia.

“This year is no different as we received another round of exceptional entries, with every entry going through a rigorous judging process, involving a number of industry and technology leaders carefully viewing all applications against best practice selection criteria  as part of a two-staged judging process.”

“Congratulations to all the 2020 Honorary Awards nominees for your peer and industry recognition and a special congratulations to the winners. Thank you Greg, Bob and Nuheara for your contribution to and support for our ICT and technology sector.”

Watch the Honorary Awards announcement with Charlie Gunningham at https://youtu.be/UGc7tWrIjTQ